I cannot believe it has been 6 years since my last blog post!  Anyway, I have some good news to announce here.

In the Python community, VTK has always been somewhat difficult to install (in comparison to pure Python packages). One has required to either use a specific package management tool or resort to source builds. This has been a major problem when trying to install tools that rely on VTK, like Mayavi.

During the SciPy 2017 conference held at Austin last year, a few of the Kitware developers, notably Jean-Christophe Fillion-Robin  (JC for short) and some of the VTK developers got together with some of us from the SciPy community and decided to try and put together wheels for VTK.

JC did the hard work of figuring this out and setting up a nice VTKPythonPackage during the sprints to make this process easy. As of last week (Jan 27, 2018) Mac OS X wheels were not supported. Last weekend, I finally got the time (thanks to Enthought) to play with JC's work. I figured out how to get the wheels working on OS X. With this, in principle, we could build VTK wheels on all the major platforms.

We decided to try and push wheels at least for the major VTK releases. This in itself would be a massive improvement in making VTK easier to install. Over the last few days, I have built wheels on Linux, OS X, and Windows. All of these are 64 bit wheels for VTK-8.1.0.

Now, VTK 8.x adds a c++11 dependency, and so we cannot build these versions of VTK for Python 2.7 on Windows.

So now we have 64 bit wheels on Windows for Python versions 3.5.x and 3.6.x.
Unfortunately, 3.4.x required a different Visual Studio installed and I lost patience setting things up on my Windows VM.

So if you are using a 64 bit Python, you can now do

This is really nice to have and should hopefully make VTK and other tools a lot easier to install.

If you aren't aware of it yet, SciPy.in 2011 is just round the corner.
This year it is going to be held at IIT Bombay's new Victor Menezes
Convention Center (VMCC).  We have conference talks on 4th and 5th and
tutorials on 6th and 7th.  We have invited several key people from
the "scientific computing with Python" community.  We have an awesome set
of talks and tutorials.  Eric Jones from Enthought is our keynote
speaker.

In 2009 and 2010 we did workshops on basic scientific computing with
Python.  This year our tutorial track features several advanced topics
including, image processing, machine learning, symbolic computing,
mapping and geoprocessing, Traits/TraitsUI, Mayavi, Sage and Cython.

If you wish to attend the conference,  feel free to drop in and attend,
free of cost -- but you'll miss out on the awesome food, t-shirt and
other goodies if you do not register.  It would be best if you did
register though.

The main organizers of SciPy.in 2011 are FOSSEE.  Enthought (India) is
also helping organize the conference.  MHRD and Enthought are our
financial sponsors and we are grateful to them for their continued
support.

Given the nature of the talks, the tutorials, the location, you are
going to miss out if you choose to not attend.  Register before 2nd to
avail of reduced rates.  Spot registration is certainly available but is more
expensive.

Enthought, as most of you (following my blog anyway) know,
is a leading scientific computing solutions provider and an extra-ordinary
champion of scientific computing with Python. Enthought is headquartered
at Austin, Texas and has offices in New York, Cambridge (UK) and Brussels.
Enthought has started a new development office in Mumbai, India. Starting July 2010,
I am taking two years of long leave (lien) from IITB to serve as the
Managing Director of Enthought India. We have a nice office located at the Supreme
business park in Hiranandani, Powai.

We right now have three people (including yours truly) and are looking
for more people. We aim to build a strong development team. We are
currently working on an exciting new product that we will release over
the course of next year. Stay tuned!
If you are a strong Python developer with a penchant for challenging
problems and building scientific computing applications, do send us your
resume.
I can be reached on my usual email addresses and my Enthought email is
prabhu at enthought dot com. Possibly the best place to send in resumes is:
india-jobs@enthought.com
Posted by Prabhu Ramachandran at 7:54 PM 1 comment:

The FOSSEE project started in mid 2009 and has been doing fairly well.
We've conducted several Python and Scilab workshops all over India. We
organized two SciPy.in conferences (2009 and 2010) and hosted Sage days
25. This year we are organizing SciPy.in 2011 at IIT Bombay.
We've generated plenty of introductory material on elementary Python for
scientific computing, version control and using GNU/Linux tools. Using
this material we are conducting a "Software development techniques for
engineers and scientists" course at IITB. There are numerous other
initiatives including a textbook conversion project that we are working
on.
Recently, and rather significantly, we've have embarked on an ambitious
effort to train about 650 teachers all over India over five weekends
this month on "Software development techniques for engineers and
scientists". This is part of Prof. Phatak's IIT e-Outreach program
funded generously by the MHRD, India. More details are available here.
The basic idea is that we conduct workshops at IIT Bombay and the
lectures are streamed online. Students are able to interact with the
faculty via the internet. We are very excited about this since this
allows us to reach out to a large number of people in one shot. It is
also a tad scary since the numbers are so large. So far it has worked fairly well.
I did write a simple Django based application to take online exams and automatically
grade the submitted solutions and will probably talk about that in more detail
at a future point.
Posted by Prabhu Ramachandran at 7:40 PM No comments:

... and they lived happily ever after

It has been two years since I blogged about anything significant. A lot
has happened and I thought I might as well give everyone a news update.
In November 2009, Kadambari Devarajan (KD) and I were married. I'm not
getting into the details here but in short, she stole my heart, I
proposed, we were married in November and we lived happily ever after.
:)
The marriage ceremony was smooth and memorable thanks in very little
part to the two of us. My parents organized a wonderful, short and
thoughtful marriage ceremony and KD's parents a wonderful reception. We
cannot thank our parents enough! My cousins thoughtfully organized and
hosted a mehendi party which was very memorable. The support of our
siblings at this time was touching. Close friends and relatives
travelled from far and wide to attend the marriage and made it very
special for us. Many friends and relatives offered us their advice,
support and help. Many of you attended the wedding at short notice and
showered us with gifts and good wishes. Our heartfelt thanks to one and
all! 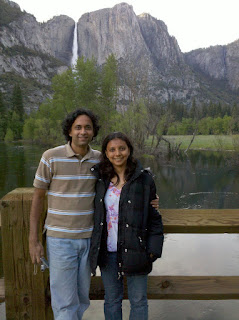 Ever since, KD and I have been extremely happy together. Life has
changed in many ways. We've travelled the world (the picture above was
at Yosemite, courtesy Jarrod Millman), done many things together and
are having a wonderful time. Thanks again to all of you who got
us together. :)
Posted by Prabhu Ramachandran at 6:51 PM 2 comments:

I'm excited to announce that the first "Scientific Computing with Python" conference in India (http://scipy.in) will be held from December 12th to 17th, 2009 at the Technopark in Trivandrum, Kerala, India.

The theme of the conference will be "Scientific Python in Action" with respect to application and teaching. We are pleased to have Travis Oliphant, the creator and lead developer of numpy as the keynote speaker.

Here is a rough schedule of the conference:

The tutorial sessions will have two tracks, one specifically for teachers and one for the general public.

There are no registration fees.

The call for papers will be announced soon.

This conference is organized by the FOSSEE project funded by the Ministry of Human Resources and Development's National Mission on Education (NME) through Information and Communication Technology (ICT) jointly with SPACE-Kerala.
Posted by Prabhu Ramachandran at 2:32 AM 6 comments:

Sage notebook, Mayavi2 and 3D interaction on the web

Thanks to a cool open source x3d viewer along with its browser plugin -- freewrl, I can now use mayavi2 in a sage notebook and also get 3d interactivity! To see this in action see here. You should see something that looks like this: 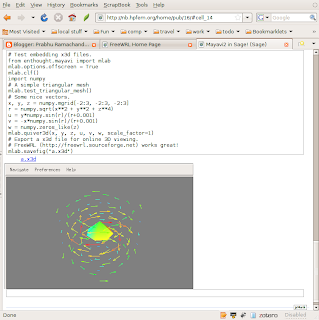 The view on the bottom supports full 3d interactivity, which is really quite cool. This works seamlessly with the debian package on the freewrl site. I just installed the packge on my Ubuntu 8.04 machine and it works really nicely. The only trouble is that for more complex visualizations, the x3d file exported can be quite large but this can be partially alleviated by perhaps using mod_deflate and similar options on the server.

Now the x3d embedding above is a hack currently since I manually embedded the necessary HTML tag into the sage worksheet but as can be gleaned from this thread, this should be trivial to add to Sage proper. This opens up an exciting new possibility for mayavi2 on the web.
Posted by Prabhu Ramachandran at 9:36 AM 2 comments: